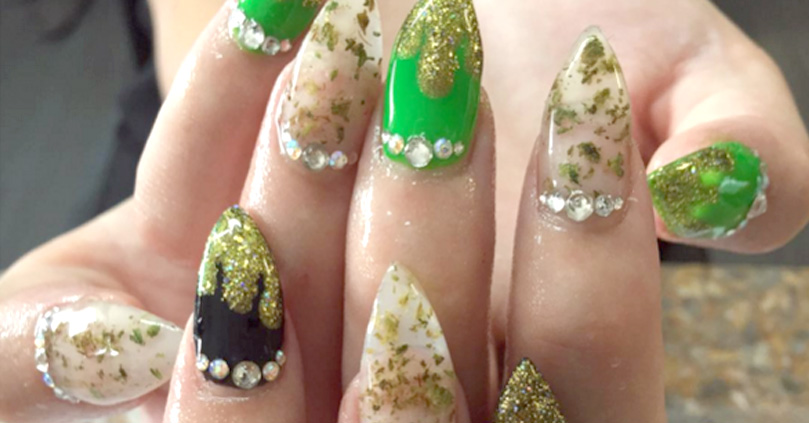 An interesting trend has begun to catch on among many nail art enthusiasts—lady cannabis aficionados across the nation have begun to incorporate actual marijuana into their manicures. That’s right; real cannabis flower on your fingernails. BuzzFeed brought attention to the new trend in late March, tying its origins to a local Bay Area nail lounge.

Louisiana Pham owns the Orchid Nail Lounge in Santa Clara, and says it all began when a client requested a weed-themed manicure for Hemp Con about two years ago.

“We were just saying we needed to do something cool and my client didn’t find anything online that was unique,” she told Buzzfeed. “Nothing was artistic to match her style and her demeanor.”

The design was a major hit at the event; many passersby stopped to marvel at the spectacle and comment on the unique style. Since that Hemp Con, the trend has continued to grow, and was recently picked up by major outlets such as BuzzFeed, Cosmopolitan, and Oxygen.

Elemental employee Christina Ramirez is a client of Pham’s, and explains that different strains can have different effects on the final outcome of the manicure.

“For 4/20, I wanted something with a lot of color and contrast, so it came down to three purples,” said Elemental employee Christina Ramirez, a client of Pham’s, “My choices were Purple Afgoo, Purple Sticky Punch, or Purple Noir. I wound up going with the Noir because it had the deepest hues of purple.”

Pham was recommended to Ramirez by a friend, whom she contacted after her regular nail technician refused to fulfill her request. Pham was willing to oblige.

“I was never hesitant. I’m on board with any idea,” she said. “I sit down with clients, they show me what they want or tell me to create something for them--it’s not just weed, it’s art.”

An increasing number of clients seem to agree with that sentiment; Pham said she now gets calls nearly every day regarding “weed nails” and usually does about one per week. She stressed that each of these jobs are different, because “every cannabis user is different”—thus, she tries to incorporate a design that “best matches the client’s personality.”

You can check out some more of Pham’s creative designs here.