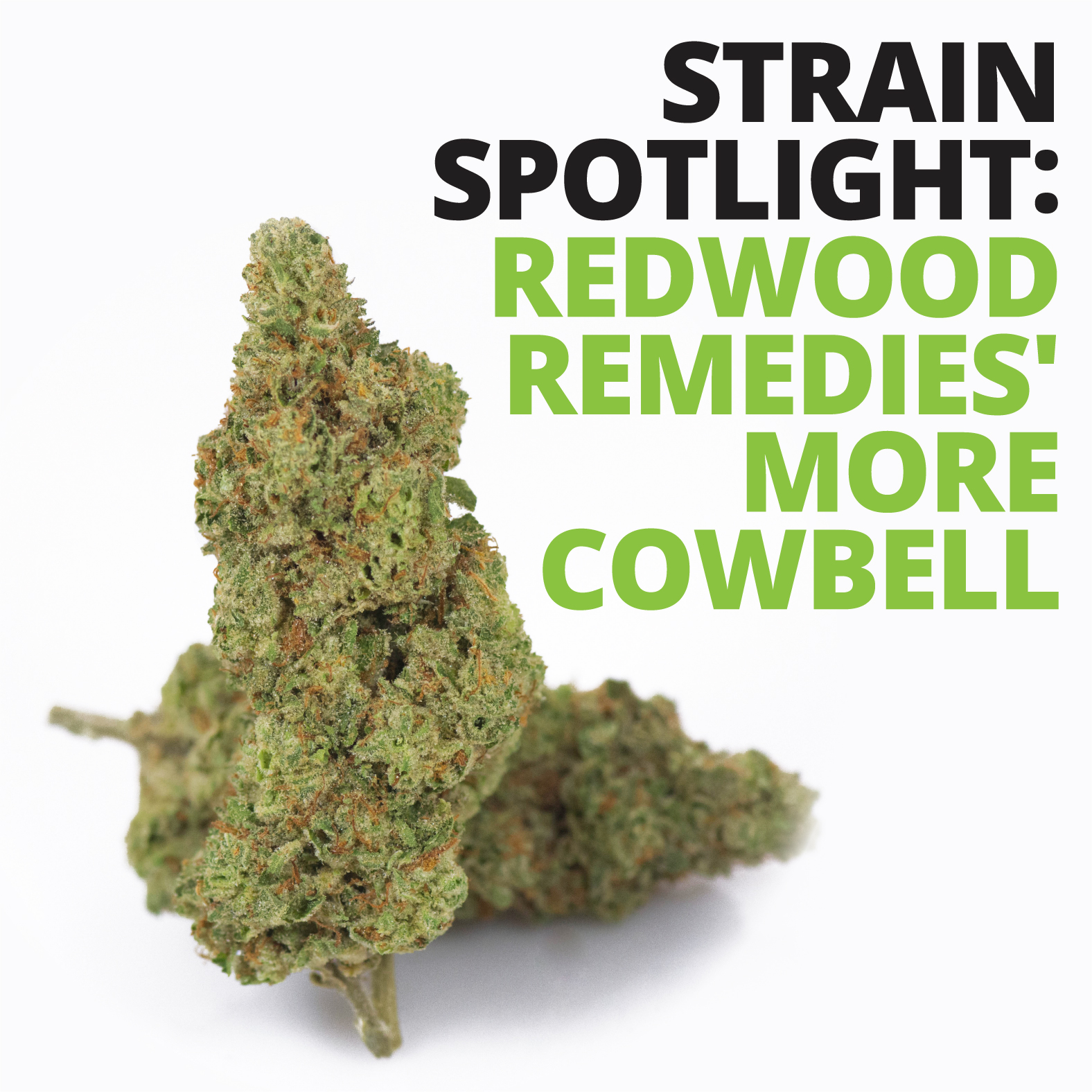 ”I’ve got a fever and the only prescription is more cowbell!” famously yells Christopher Walken to his Saturday Night Live co-stars on a cool April night in New York City back in 2000. Just as Walken envisioned on that crisp spring night, the strain More Cowbell (25.39% THC) from Redwood Remedies would be introduced within the next couple of decades, and quickly become an indica-dominant force within the world of cannabis. Absolutely uncanny foresight. OK, so yeah, while Walken may have realistically been thinking of a different cowbell, and it probably doesn’t actually cure any fevers, More Cowbell has been a consistently quality force on the EWC menu for several years now, and we thought it past due for deep dive into what makes Cowbell great in our newest Strain Spotlight.

With thick, chunky, finger-like nuggets that satisfyingly clank against the side of their jars when shaken, Cowbell sets the tone before its protective seal is even cracked. Once it is, visitors are immediately met with a pungent, earthy fragrance that takes much of its influence from one of its parent plants, Hashplant. With a full lineage of GSC x G13 x Hashplant, this powerhouse strain has several different characteristics fighting for relevance in their new form. While the Hashplant is made apparent through the aroma, we’ve found the G13 presents itself through the bud structure, and GSC is most identifiable in the effects upon consumption.


These tall, robust nuggets find a desirable balance between dense and fluffy, lending themselves to being broken up either by hand or through use of a grinder. With a vibrantly green body and clumps of wild orange hairs throughout, Cowbell passes the eye test with flying colors -- while it’s certainly one of those strains that looks fun to play around with and admire before consumption, we recommend being careful so you don’t lose any valuable trichomes! While listed as a 65% indica and 35% sativa hybrid, we’ve found Cowbell to be a bit more on the heavy side, with an immediate, stoney-behind-the-eyes type of experience that will have visitors pleasantly sinking into their couches.


We grabbed a half gram to roll a quick joint and test out how the newest batch down at Elemental is hitting -- spoiler alert: it’s hitting good. We broke a small piece off a massive Cowbell nug, and began breaking down our product by hand to help give the joint a stronger, more firm structure. Cowbell somehow even looks higher quality once broken down -- clumps of bright green foundation with the wild orange hairs becoming more prominent once fully separated from the body. We put flame to tip and inhale, immediately being met with a funky, earth-like flavor that will surely make fans of flavor aficionados across the Bay Area. Cowbell’s strong THC content and indica-leaning tendencies are instantly identifiable, making it an ideal selection after a long day at work when you’re looking for something strong and fast-acting. We sit back and relax, as the calming effects of Cowbell continue to settle in for the next hour or two, leaving us in a state of canna-bliss and realizing exactly why Walken was so fervently requesting More Cowbell.


So, hurry into Elemental and get your Cowbell prescription before there’s no More! Ask your consultant to check out Cowbell on your next visit -- hope to see you soon!