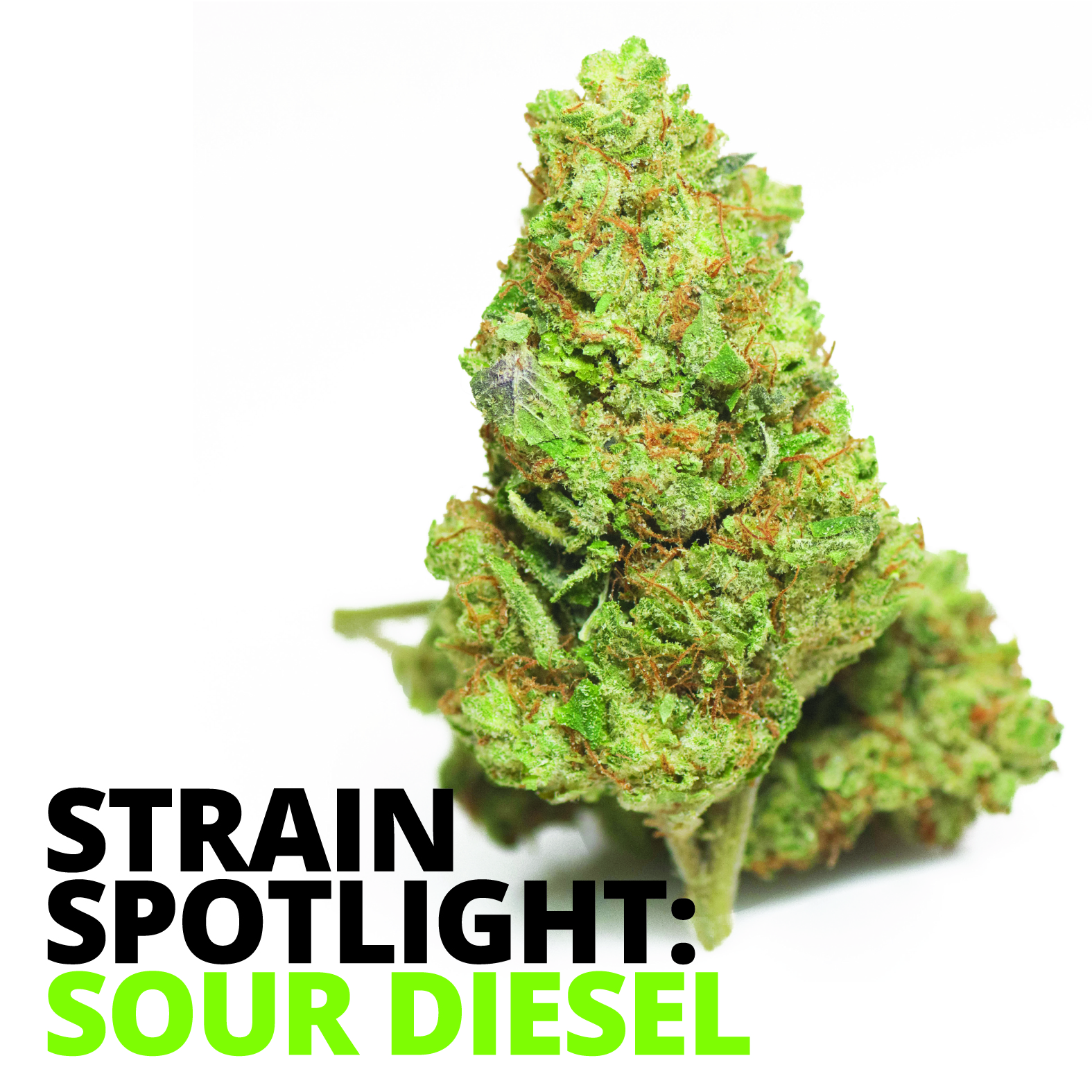 The Sultan of Sativa. The King of Ash. The Colossus of Chronic. The Great Bambalachacha. Sure, these may just be half-assed, cannabis-centric tweakings from the famous Sandlot quote -- admittedly, I’ve never actually heard any of these used in reference to the classic sativa-dominant strain Sour Diesel. But I do propose, right here, right now, that we begin doing just that -- after all, there aren’t many (if any) sativas in existence that offer more longevity, name recognition, and tried-and-true potent effects as this legendary East Coast creation. Whether you’re trying original Sour Diesel, or one of its many phenotypes and/or crosses, chances are, that if you’ve tried a properly-grown sample, you likely have a similar affection for the strain popularly referred to simply as Sour D.

This story may sound familiar, but the origins of Sour Diesel can be tied back to a 1990s Grateful Dead concert, according to MaryMart: “The story goes the seeds were bought at a 1991 Grateful Dead concert in Colorado before being distributed throughout the East Coast for further development. Combining the seeds with Chemdawg plant’s and later on Super Skunk, the Sour Diesel strain was formed, as well as OG Kush.” (At this point in our ‘Spotlight’ series, we’re beginning to think every major cannabis grower in the 1990s was also a committed Dead Head)  Following its discovery, the strain immediately caught on with sativa smokers: the striking, fuel-like smell almost acts as a smelling salt before even smoking -- a quick whiff in the morning is sure to help users get going. It only gets better from there, as the aroma translates perfectly to smoke, and Sour D’s ideal terpene profile works perfectly with one’s endocannabinoid system to create an effective and pleasurable user experience.


We were able to track down a certified terpene report on Sour Diesel which explains that the strain’s two most dominant terpenes are linalool and limonene. Linalool is among the most commonly found terpenes in cannabis--it’s often associated with lavender and other purple strains such as GDP, Purple Punch, and others. Patients seeking help with depression, insomnia, or inflammation tend to find benefit in linalool-heavy strains. Limonene is likely responsible for the subtly sweet and piney fragrance that’s detectable, but somewhat blanketed by Sour D’s overwhelming fuel aroma. Effects-wise, limonene has been associated with enhanced mood, as well as stress relief.


As we’ve been fully immersed in our vaporizer cartridge phase as of late, our eyes immediately darted over to Sublime’s Sour Diesel Gold Cartridge when seeking a product to sample for this write-up. We’ve been seriously impressed with Sublime’s offerings in the past, and it’s take on Sour Diesel seemed like a no-brainer. We scooped the half-gram cartridge ($39/each, WSL) and Sneaker battery and scurried back to our safe place to try it out.


We attached the battery to cart and took our initial hits -- the oil pulled smoothly and potently, providing a hard-hitting rip while also going easy on the throat. Aside from a slight cough upon exhale (more from a slight tickle, rather than adverse reaction), it was hard to discern if we even got a hit. But as the next couple minutes would prove, as the effects strapped down and settled in, we most definitely did get a hit. Sour D’s fuel-like flavor translated well to oil, though Sublime’s take has a bit more sweetness than we’re used to, it was certainly a welcomed surprise as its synergy with its diesel flavor was just right. Though the effects were more of a slow creeper, once they were fully at work, their longevity was impressive -- a few hours of a pleasantly functional cerebral buzz coupled with an innate feeling to do something productive. No doubt more of a lets-get-something-done type of strain.


Much like our prior experiences with Sublime, it’s subtleness makes for an easy, borderline non-existent, comedown. No lethargy, heavy eyelids, or searching for motivation involved -- when the effects wear off simply take another pull to dive back in. All in all, we were supremely satisfied with our Sour Diesel cartridge -- it was a great overall experience, and certainly worthy of the nicknames mentioned at the beginning of this review.


Ask your consultant to check out our Sour Diesel varieties on your next visit. Hope to see you soon!