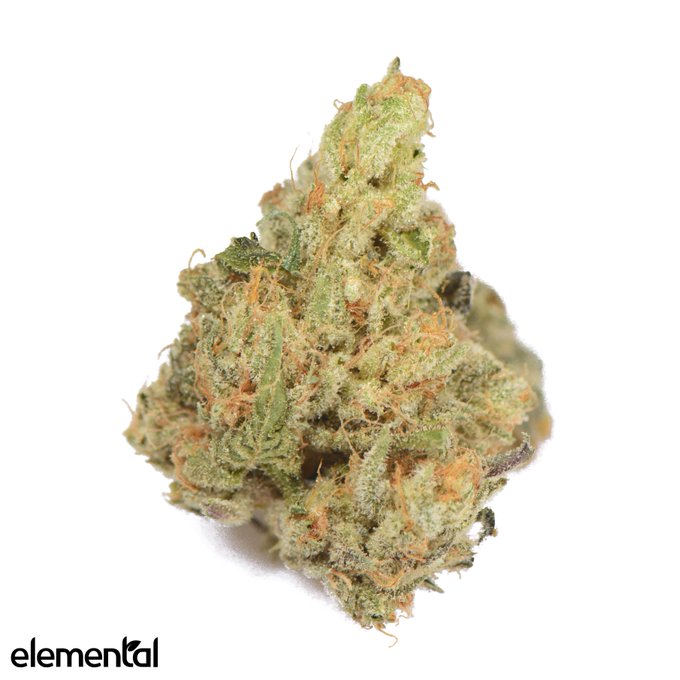 Regarded as a crown jewel of West Coast genetics, few strains offer the name recognition Blue Dream boasts. Providing a desirable balance of euphoria and relaxation, BD is often cited as the quintessential example of a '50/50 hybrid,' making it a perfect selection for novice patients.

The origins of BD are notoriously hazy, but here’s what we do know: the strain is a cross between Blueberry and Haze, and is believed to have initially sprouted up in the Santa Cruz region. The majority of phenotypes available to patients today are considered to be sativa-dominant, although some “express a more indica-like look and feel” according to Leafly. This versatility and accessibility quickly made it one of California’s most popular strains, and still aids in its continued, worldwide popularity to this day.

BD is visually pleasing and consistent in its appearance: soft, spiky nugs, offering a light green hue throughout, and muted orange hairs intertwined within. The aroma can best be described as subtly sweet, with a hint of earthiness; mildly reminiscent of the scent secreted by Afghani-heavy strains. This is a result of BD's most dominant terpenes as identified by SC Labs: myrcene and pinene.

Myrcene is the most common terpene found in cannabis, and likely most responsible for its sedating effects. It has proven to assist certain cannabinoids in crossing the blood-brain barrier more easily, thus, increasing their potency. It has also shown efficacy in fighting against inflammation, diabetes, and chronic pain. Pinene somewhat mitigates the sedating properties of myrcene, promoting alertness and offering a pine-like fragrance. It also possesses antibacterial, antioxidant, and anti-inflammatory properties.

The batch of BD we sampled is from King's Garden ($50/eighth, 22.55% THC, available at Elemental while supplies last): uniformly triangle-shaped, fluffy nuggets, emitting the definitive “dreamy” aroma the strain has become notorious for. The buds broke down well, with flower separating ideally from stem--not too moist, not too dry. We promptly packed a bowl into our handy-dandy spoon pipe and commenced the session.

The initial green hit tasted of fresh berries with a hint of oak, setting the tone for what would be an enjoyable experience. I exhaled, sending the day’s stresses and worries along with the thick cloud of smoke that escaped my lungs. As the effects settled in, I felt a calming wave of relaxation overtake my body, particularly my legs, quickly followed by an intense cerebral buzz and discernible mood-enhancement. It was easy to see why the ‘Is Blue Dream a sativa or indica?” debate still rages on. The pleasant effects carried on for an hour and a half, before slowly dissipating over the following 30 minutes. We experienced no ‘crash’ afterward, carrying on with the rest of the day’s activities with little detectable lethargy.

Be sure to ask your consultant about Blue Dream on your next visit--this fantastic batch won’t be around for long!