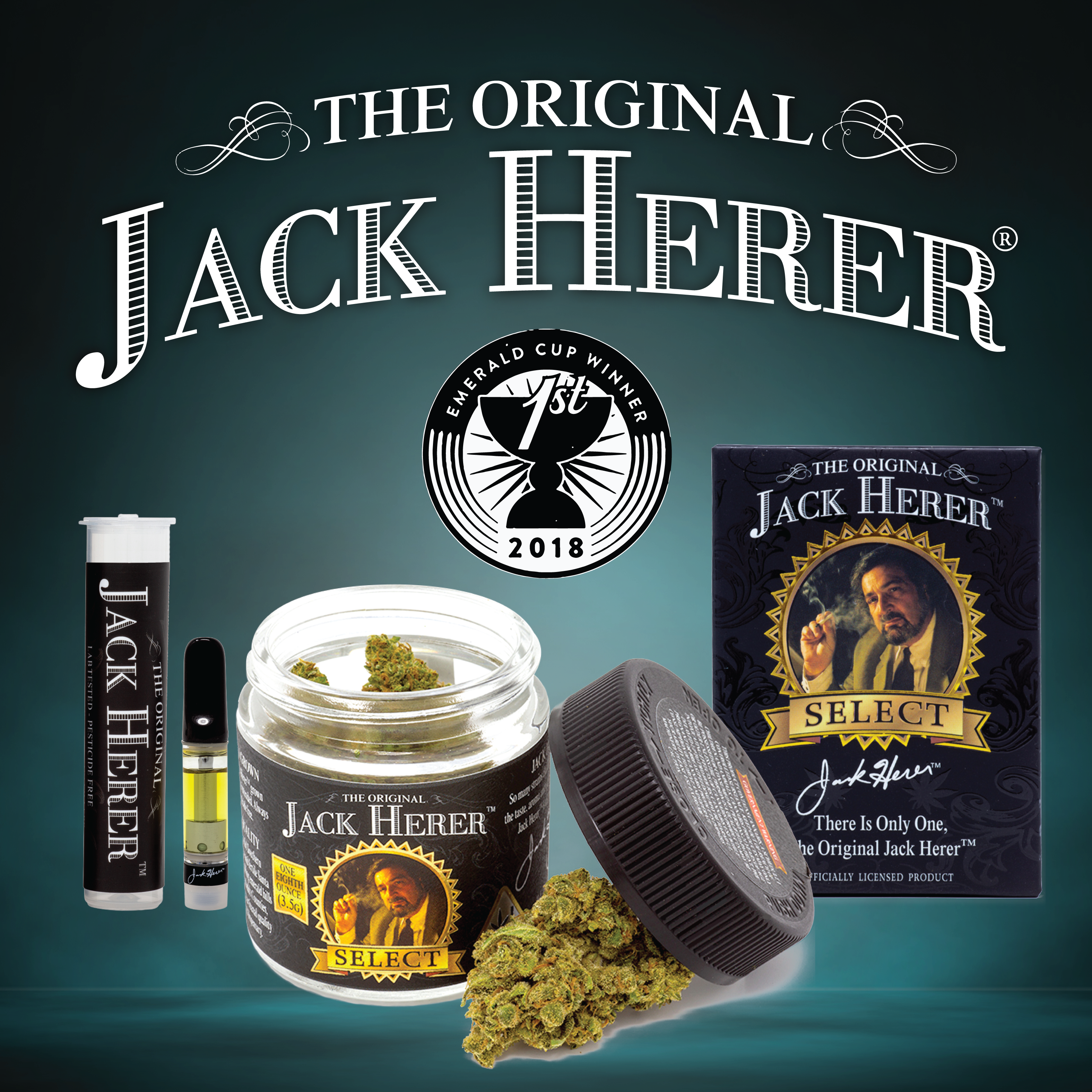 Named for one of the most influential activists in cannabis history, the Jack Herer strain had an extraordinary reputation to live up to following its introduction by Netherlands-based Sensi Seeds in the mid-1990s. Now, almost two decades later, its sustained popularity throughout the world suggests it has done a mighty fine job.

“Jack,” as it’s affectionately referred to as by patients, boasts a laundry list of accolades, a testament to its longevity and consistency throughout the years: 1st Place 1994 High Times Cannabis Cup, 3rd Place Sativa 2012 High Times Cannabis Cup, and 1st Place 2016 High Life Cup just to name a few. Its prominent, pine-like aroma is accessible to novices and vets alike, and has become the standard for what a sweet-smelling sativa strain should provide.

Appearance-wise, Jack is refined, yet inconspicuous: slightly varying shades of forest green dominate the bodies of its buds, with short, muted orange hairs occasionally poking out from within. The nugs are rather spiky, soft to the touch (much further toward fluffy than dense), and break down ideally, even without use of a grinding device. While it may be easy to pass over when evaluating simply by "the eye test,” those who make it to the smell jar will surely recognize how this strain has earned its status. The most common terpenes found in Jack are caryophyllene and terpinolene.

Caryophyllene is the only terpene known to interact with the endocannabinoid system (it can bind to CB2 receptors), and is also observed in cinnamon leaves and black pepper. Additionally, a 2014 study indicated it can be useful in treating depression, which may account for Jack’s mood-enhancing characteristics. Terpinolene offers a “pleasurable conifer tree aroma with subtle sweet notes of floral and citrus.” It’s thought to possess both antibacterial and anti-insomnia properties, and may slow the growth of cancers, too.

We sampled a gram of artisan top-shelf new Jack Herer from the folks at Original Jack Herer themselves, using a single Zig Zag 1 ¼” rolling paper as our chosen method of delivery. We broke the nugs down with our fingers, which immediately intensified the already-overwhelming aroma of sage and pine. The soft, broken-down product worked flawlessly with our wrap, quickly conforming to an ideal baseball-bat-like shape, and evenly distributing medicine for a pleasant burn. After stuffing in the final morsels of the gram and quickly admiring our roll, we flicked the lighter, lit our joint, and slowly ascended into pure Jack-aided bliss.

The initial green hit was delightfully sweet--though with more of a syrupy flavor than originally suggested by the aroma. The smoke was smooth and easy on the throat; I exhaled a notably thick cloud without the slightest urge to cough. Jack’s effects gradually revealed themselves over the following five minutes: content smiles slowly crept onto our faces, accompanied with a sudden inclination to engage in some kind of physical activity-- definitely a clean-the-house type of strain. There was a palpable cerebral buzz as well, though never overpowering--great for patients needing to medicate, but still maintain high functionality throughout the day. The effects sustained for the better part of two hours before eventually dissipating, leaving us happy, humbled, and hungry!

Overall, Jack was an enjoyable experience from beginning to end: great, sweet flavor with a discernable sativa kick, and no crash afterward! Fans of other sugary daytime strains such as Haze, Trainwreck, and/or Chernobyl are sure to enjoy. We currently have several Jack varieties on the menu incl. another top-shelf Jack Herer flower from King's Garden ($50/8th, WSL), two Jack cartridges: one from Original Jack ($50/gram) and one from Eden Extracts ($40/half gram), and Original Jack Herer prerolls ($35/3-pack)!

If you don’t know Jack, now’s the perfect time to introduce yourself; be sure to ask your consultant on your next visit!