The New Dispensary at Timothy Drive 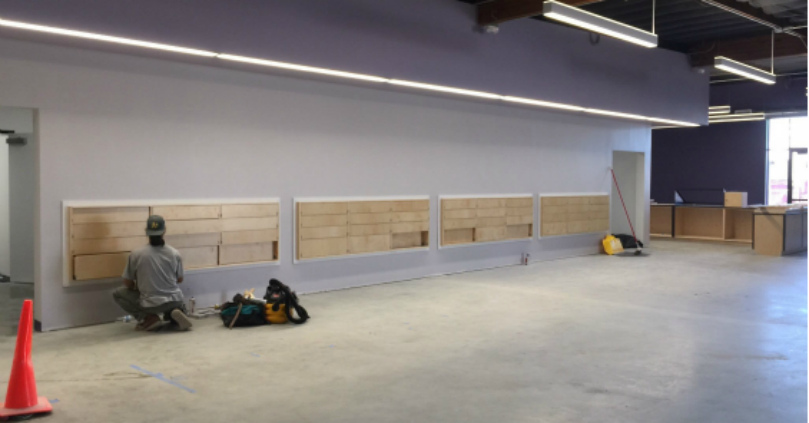 There’s a swath of purple and a lot of lavender. It’s soothing. And that’s what a dispensary should be. The new home of Elemental Wellness will be a little bigger and a lot more convenient, but most of all the building is likely to make members feel good: Relaxed. Peaceful. Calm. The effect is already working on Project Manager Amanda Griffin-Snyder, even though the space won’t open to members until Dec. 7. “I feel really at peace here,” she said, “and I get a lot done.”

The dispensary will move overnight, serving members at the existing building on Charcot Avenue through Dec. 6 and opening at 985 Timothy Drive, San Jose the next morning. One of the biggest changes members will notice is a second entrance, set up solely for pre-orders. The main entrance, at the building’s rear, opens into a much larger showroom and service counter. Members will also find 13 registers in the showroom and three more at the pre-order counter, more than double the seven registers at the original site. “What’s really wonderful about this location is having two entrances, with pre-order at the front where it will be bagged and ready so members can get in and out quickly,” Griffin-Snyder said. “And the pre-order entrance has its own parking.”

But the showroom is the showplace. The centerpiece is a set of five vertical panels suspended from the ceiling like enormous cutwork linen, each with a cannabis motif that provides a sightline to the showroom. “I think that is a wow factor,” Griffin-Snyder said. The long-empty office space now has a glass-walled event room with a maple floor for yoga and tai chi and a room designed specifically for private consultations. “I’m very visual. I can see the potential, and I saw the potential almost immediately when we first visited,” Griffin-Snyder said. “Then we brought the architect, and he was walking through, pointing out things we could do to make it flow, and feel harmonious. When he sent his proposal with the floorplan, it all made sense. That was when it set in, when I thought, ‘I know this is going to work.”

Despite Griffin-Snyder’s confidence, the project had a long way to go. The San Jose City Council prompted the move when a new ordinance went into effect requiring dispensaries to locate only in certain commercial zones. It took months of scouting, but Griffin-Snyder and her team eventually found a safe neighborhood not far from the original dispensary. She knew the pre-order entrance, expanded showroom, increased number of registers and 45-space parking lot would make the experience more speedy and efficient, but the most unique change is the way the cannabis is dispensed. Custom-designed drawers slide through both sides of the wall, allowing employees to restock as quickly as a member makes a selection. There were challenges, of course. I’m very even-keeled, but there were moments I really needed to be alone,” Griffin-Snyder said. “I would come here to gather my thoughts, and remind myself that all the hard work – the small battles won during construction, the looming deadlines, passing city inspections – was going to be worth it. Patients were going to come here and feel at ease, calm and peaceful.”

And that’s the point. As Minoru Yamasaki, one of the most prominent American architects of the 20th century said: “We build buildings which are terribly restless. And buildings don't go anywhere. They shouldn't be restless.” Griffin-Snyder certainly agrees. And she’s eager to find out if members, who follow her to her new address at 985 Timothy Drive, San Jose, do too.