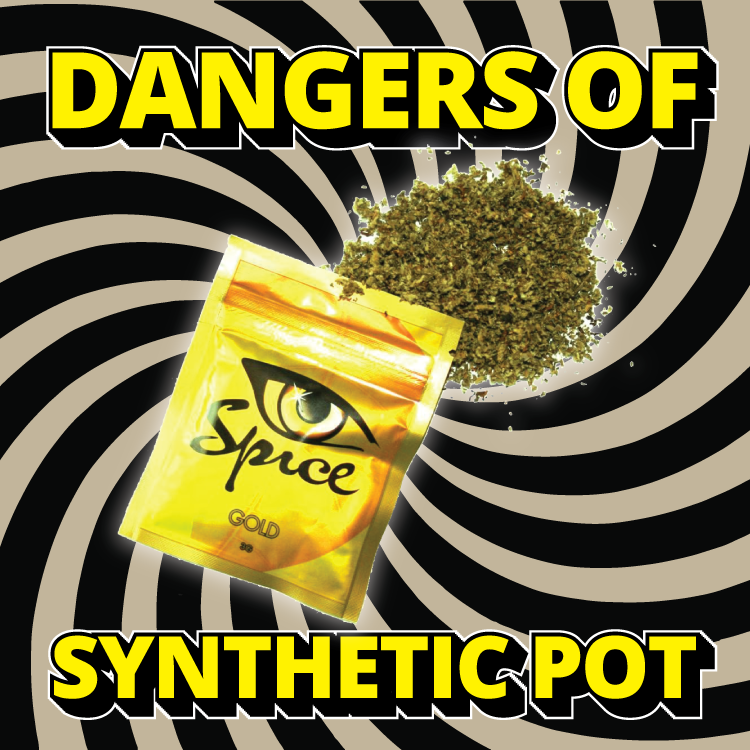 A concerning trend that's been gaining popularity over the past decade has been conspicuously rearing its ugly head in the United States for the past few years. Synthetic cannabis, sometimes referred to as K2 or Spice, has been wreaking havoc on users from Washington all the way to Connecticut, where approximately 90 people overdosed in New Haven last month. It’s composed of various herbal and chemical compounds, that, when smoked, supposedly “mimic the effects of the psychoactive properties of THC.”

While synthetic pot isn't necessarily new, its prevalence and frequency with which it sends its users to the Emergency Room have notably increased across the nation as of late. We take a glance at what makes these compounds so destructive, and why, outside of its misleading name, has nothing to do with real cannabis at all.

The origins of synthetic cannabis are a bit hazy--the groundwork can be traced back to the 1940s, where THC and CBN were first synthesized by organic chemist Roger Adams. These so-called synthetic cannabinoids became instrumental in the creation of medicines such as Nabilone and Marinol, both aimed at helping patients relieve pain and nausea. Soon after, John W. Huffman and his team of chemists at Clemson University began synthesizing more than 450 cannabinoid compounds to “aid in research of multiple sclerosis, AIDS, and chemotherapy.” These compounds proved relatively easy to construct, and, with no restrictions yet in place, Huffman’s work would unfortunately prove essential in the compounds’ transition to recreational use.

The drug initially gained popularity in Europe, with Huffman learning of users abusing his compounds through a German magazine article; it reported synthetic pot had begun popping up around Europe in 2006. It progressed swiftly, soon trending in the USA as well, and by 2009, there were an influx of competitive, legal brands offered at a myriad of bodegas and head shops around the nation.

It rapidly became an attractive option for high-tolerance cannabis users (it’s been reported that certain chemicals in synthetic pot are up to 100 times more potent than THC) and potential cannabis users who face drug testing (synthetic cannabis is undetectable on many urine tests). Huffman was quick to speak out on the unintended use of his creations, saying, “These things are dangerous--anybody using them is playing Russian roulette. They have profound psychological effects.”

How can this adversely affect its users? Well, natural THC found in cannabis only partially attaches to your cannabinoid receptors, creating pleasant, manageable effects for the majority of users. The compounds identified in synthetic pot, however, have an “unusually strong binding to cannabinoid receptors that produces unforeseen downstream effects in the brain and nervous system like seizures, organ failure, and cardiac arrest.” This may account for the psychotic episodes and zombie-like effects that have been reported by users across the globe.

The moniker 'synthetic pot,' has been scrutinized by many members of the cannabis community, claiming any kind of reference to natural cannabis when speaking of the drug is harmful to the movement. In addition to its countless detrimental effects, the knowledge that its synthetic compounds are not actually classified as synthetic cannabinoids further distance it from natural cannabis.

Also, unlike the lab-tested flower we offer at Elemental Wellness, it’s hard to tell what exactly you’re consuming, reports The Huffington Post: “The compounds itself, it’s almost like a DNA, like little piece of DNA, and some of the analogs could be 1 to 800 times more powerful, some are 25 times more powerful, some are 5 times.” With a sky-high potency and often unpredictable effects, the drug has already claimed a handful of lives in its relatively short existence; cannabis, as we know, has never caused a single death.

Local and federal governments have formulated several attempts to outlaw these designer drugs--but their manufacturers are always one step ahead of the law: the drug currently appears to be more readily available than ever. We’re fortunate to reside in California, where quality, natural-grown cannabis is produced in abundance and a collectively progressive mindset is maintained.

The situation is much more dire in areas where cannabis still carries a largely negative stigma and premium medicine is difficult to come across. How much longer will the government deny the shortcomings of its failed War on Drugs, and enable the market for dangerous drugs such as synthetic pot to remain prosperous? With potential California legalization and federal descheduling of cannabis around the corner, it appears we’re heading in the right direction--but in the meantime, a solution must be found to curb the ever-growing synthetic pot issue.