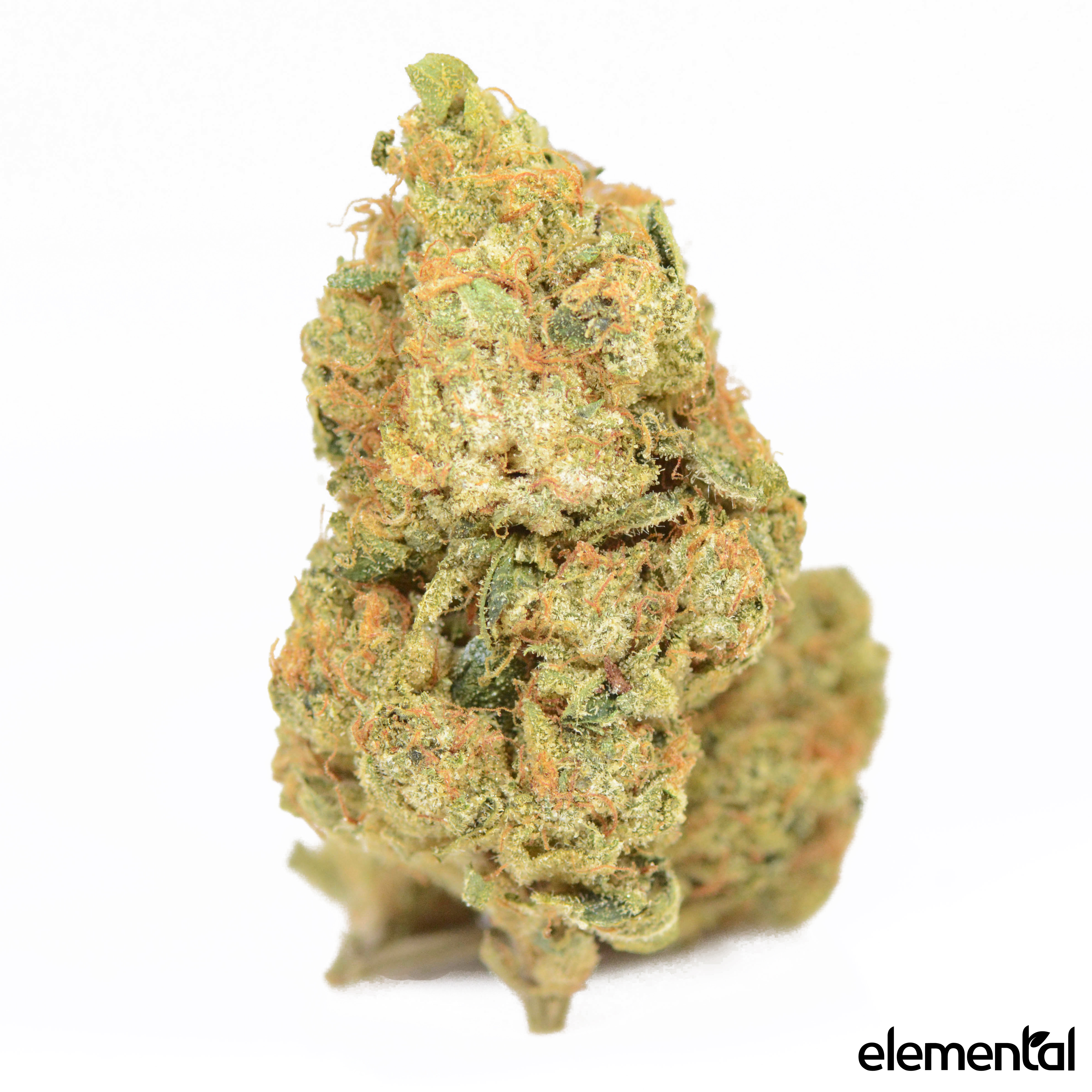 Long considered among the most revered of OG genetics, Platinum OG is a 75/25 indica-dominant hybrid offering uniquely refined OG flavor with therapeutic, and often sedating, effects. When grown to its full potential, Platinum’s dense, trichome-laden nuggets stand out among the competition and its piercing, gassy-sweet aroma will have members smiling before even opening their bag.

As with many classic strains we’ve covered, there is some mystery surrounding the strain’s origins -- the consensus is its lineage consists of Master Kush, OG Kush, and a third unknown, possibly purple, parent. This probable lineage lines up with this strain’s notoriously heavy effects, and are the genetics you’ll see advertised at most dispensaries. Platinum was originally bred by Apothecary Genetics and derives its name from the shiny layer of trichomes coating the exteriors of its vibrant green buds. It took home a medal for ‘Best Hybrid’ at the 2012 SoCal High Times Cannabis Cup, and has earned the respect of many Elemental patients who medicate to manage pain relief and our recreational members who enjoy its potent effects as well.


Platinum’s buds tend to be small, dense, and sticky -- indicative of its strong Kush genetics. Vibrant hues of alternating light and dark greens littered with subtle orange hairs throughout its structure are also trademark draws of this powerhouse strain. Its highly-visible layer of beautiful trichomes is quite literally just the ‘icing on the bud’ in this instance. If its eye-catching appearance isn’t enough to get your attention, its aroma certainly will be; we’d recommend double-sealing your bag/container of Platinum if being discreet is your aim. Its classic OG fragrance is a somewhat familiar one, though notably more pungent, and a tad sweeter, than other run-of-the-mill OG varieties. Regarding effects, the strain is considered to be on the far ‘relaxing/sedating’ end of the spectrum, as many users have reported positive feedback when using the strain to help manage insomnia, chronic pain, anxiety, and more.


Platinum’s aroma and effects are due in large part to its most common terpenes: Linalool and Myrcene. Linalool is a sweet-smelling terpene known for its high concentration in lavender and and many ‘purple’ strains such as GDP. It’s lauded for its therapeutic properties, and has shown efficacy as a calmative, pain reliever, and antipsychotic. Myrcene is the most commonly found terpene in cannabis; it’s marked by its pronounced clove-like odor and pain-relieving properties. Strains containing more than 0.5% of myrcene are likely to cause sedating effects -- the Platinum OG sample we obtained contained 1.62% myrcene, further attesting to the strain’s deeply relaxing effects.


We were stoked to try out Elemental’s current batch of Platinum OG from FloraCal Farms (21.18% THC, available at $45/8th on the top shelf as of 7/28/2018, WSL), superbly grown to serve as an ideal sample for what the strain should offer. Dumping our product from our jar to the rolling tray, the nugs hit the surface with a discernible thud, confirming the density of these hearty little nuggets. We also immediately noticed the oft-referenced trichomes forming a thick outer layer around the entirety of the expertly trimmed buds -- we tossed them into our grinder and loaded our extra-kiefy product into our patiently awaiting Crystal Glass bong ($70/each, available in EWC’s ‘Glass & Accessories’ station as of 7/28/2018, WSL) and prepared for consumption.


Platinum’s taste delivered on the promise made by its aroma, providing a strong, fuely/lemon-like flavor that proved easy on the throat. Its heralded relaxing characteristics kicked in immediately, making our second reach for the bong considerably harder than it should have been. One decent-sized bowl was all we (high-tolerance users) needed to achieve our desired effects; the couch quickly became our temporary home as we allowed the strain to run its course, providing perceptible stress relief throughout the entirely of our bodies.


Platinum OG was a seriously enjoyable experience beginning to end -- from the prepping process all the way up to actual smoking experience. It’s quite obvious to us how this strain has garnered its reputation over the years -- Platinum is an absolute can't-miss for those who prefer indica-dominant flower.


Get it at Elemenal before this batch is gone -- hope to see you in soon!