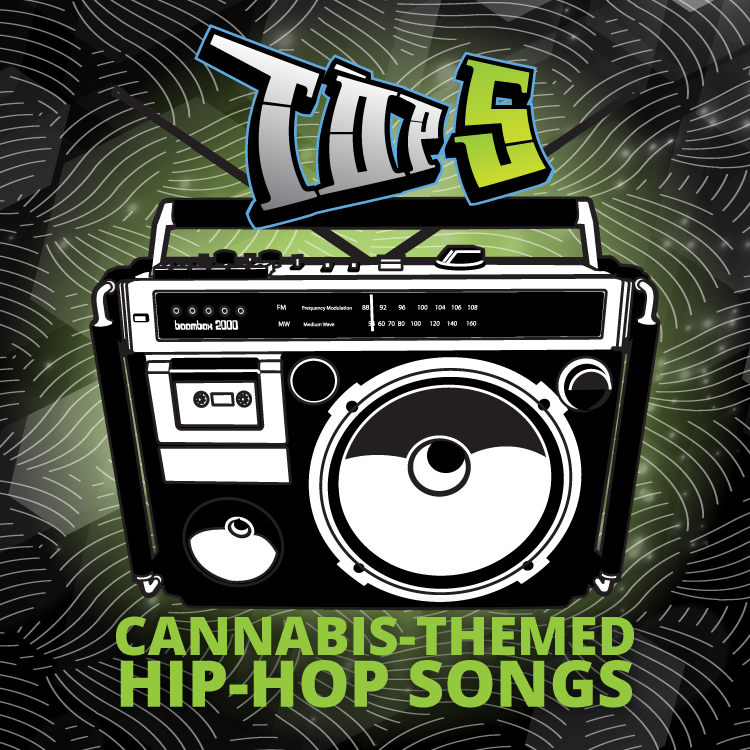 It’s no secret that cannabis and music mix well together -- many would say for both listening and creative purposes. It’s difficult to pinpoint exactly when musical artists’ love affair with Mary Jane began, but it’s certainly been a long, mutually beneficial relationship for both -- the artists are assisted in their creative processes, and in turn, will sometimes preach the gospel of the herb to the masses. Naturally, these creations generally find quick acceptance within cannabis culture -- particularly those from the hip-hop genre, which has been de facto attached to the plant for decades.
Here are five of our favorite time-tested rap tracks that have become synonymous with cannabis over the years:


5. Acid Raindrops - People Under the Stairs (2002): Respected underground duo People Under the Stairs dropped perhaps their best-known track, Acid Raindrops, in 2002 as an ode the calming effects of cannabis and the culture in general. The pair lays down crispy clean verses and an infectious hook over a characteristically chilled-out instrumental, making for ideal sesh tunes: “When the stress burns my brain just like acid raindrops, mary jane is the only thing that makes the pain stop.” This one is a guaranteed favorite in any circle -- switch it on if you’re looking for the elusive nod of approval from your smoking pals. Listen


4. How High - Method Man & Redman (1995): A certified classic from two cannabis and hip-hop pioneers, How High reached #2 on Billboard’s Rap Songs back in '95 and eventually inspired the title of the 2001 movie of the same name, also starring 'Meth & Red,' Slightly ‘harder’ and more aggressive than Raindrops, How High certainly still commands a spot in most 420-friendly rotations, though it may be considered a bit more of an acquired taste. “Look up in the sky, it’s a bird it’s a plane, It’s the Funk Doctor Spock smoking buddha on the train, How high? So high that I can kiss the sky.” rhymes Redman over the blunted beat -- great for any time, particularly evening and rainy-day listening. Listen


3. Doobie Ashtray - Devin the Dude (2002): Notoriously laid-back, Houston-based emcee Devin the Dude released the weed anthem Doobie Ashtray on his critically aclaimed Just Tryin ta’ Live album in the early-2000s. His decidedly lazy flow fits perfectly over the patently funky, Southern-style production from legendary producer DJ Premier; the lyrics somewhat humorously address Devin’s struggles with his ‘friends’ stealing his weed and leaving him with nothing at the end of the day: “Whatcha' gonna do when the people go home, and you wanna smoke weed but the reefer’s all gone, and somebody had the nerve to take the herb up out the doobie ashtray, why they do me that way?” This song has some SUPER CHILL vibes, and is probably not recommended before heading out to the club -- otherwise, Devin’s understandable anguish over running out of weed is something we likely can all relate to. Listen


2. Hits From the Bong - Cypress Hill (1993): Famously sampling Dusty Springfield’s Son of a Preacher Man, Cypress Hill’s Hits From the Bong already was blessed with a mild familiarity before it even arrived on the airwaves nearly 25 years ago. B-Real’s distinguishably nasally delivery coupled with some unforgettable cannabis shoutouts (“Plug it, unplug it, don’t strain -- I love you, Mary Jane”) solidified the song as a timeless work of art destined to be intertwined with cannabis culture for eternity. This is the rare cannabis song that transcends cannabis and has become a preferred party tune even among many non-smokers -- this one’s ideal when catering to a diverse audience. Listen
1. I Got 5 On It - Luniz (1995): Naturally, Oakland natives Luniz hold down our top spot, rounding out our list on a strong note with their 1995 international hit I Got 5 On It. The title is a reference to offering to pay for half of a dime bag ($10 of cannabis) with a friend -- a common purchase at the time. The duo lays down their no-frills lyrics (“I gotta take a whiz test for my P.O., I know I failed ‘cuz I done smoked major weed bro”) over a prototypical West Coast beat, creating a unique sound that has since resonated with several generations, and is still considered a must-play at any 420 gathering -- particularly those in the Bay Area. Great for showing off your Bay Area and cannabis pride! Listen


Honorable Mentions: Crumblin' Erb - Outkast (1994), The Next Episode - Dr. Dre (2001), Blueberry Yum Yum - Ludarcis (2004)
Any songs you feel should have made the list that didn’t? Let us know on our Facebook, Twitter, or Instagram which ones you would have included.