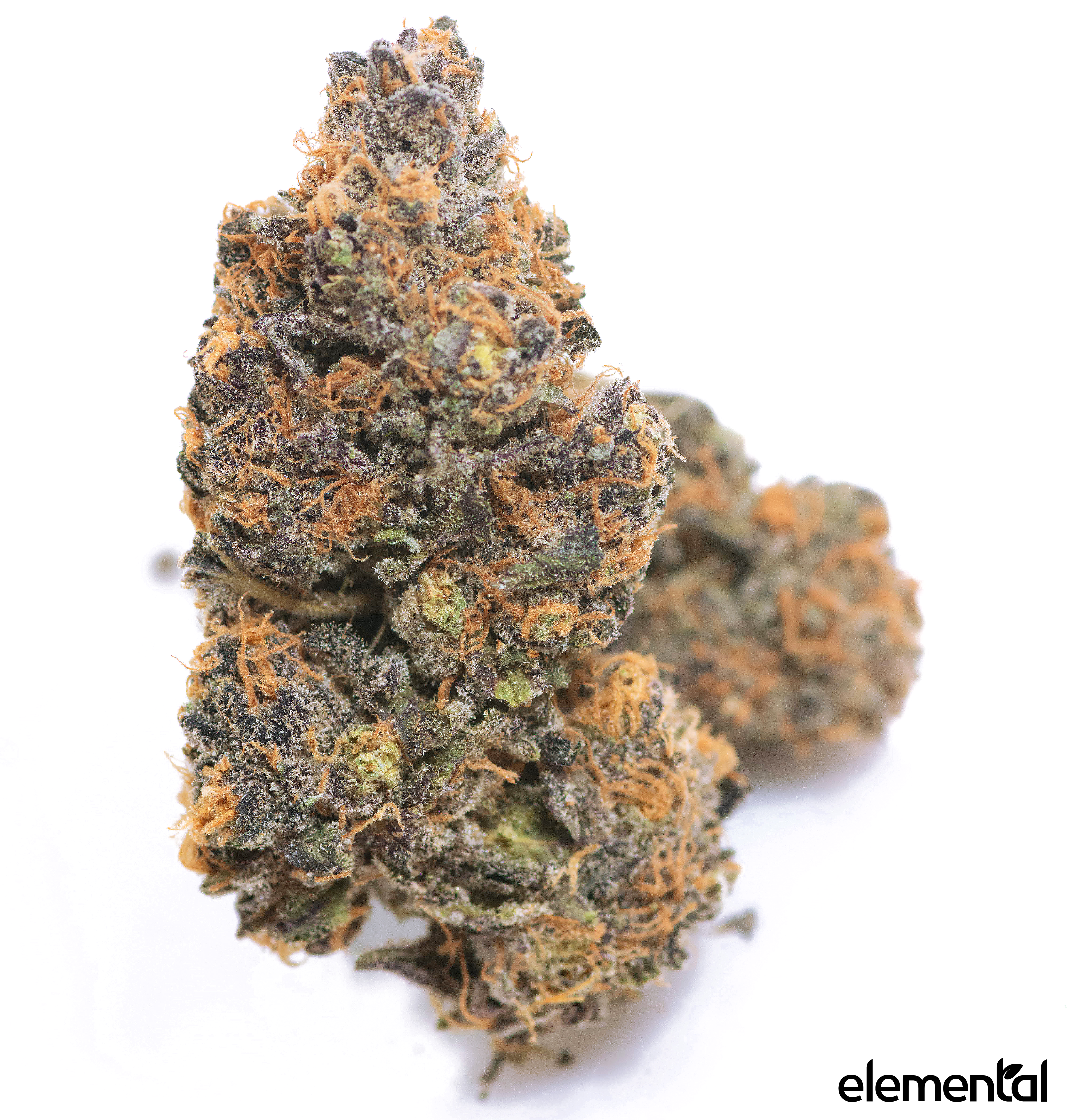 The origins of B.B. Kush are the subject of debate, but the most commonly accepted theory is that this clone-only strain was discovered by famed breeder ORGNKID (Ghost OG, XXX OG, Banana OG) in the late 1990s. This would explain the strain’s sustained interest on the West Coast, particularly in California and Oregon. Though ORGNKID himself claims the strain’s genetics are DJ Shorts Blueberry and Afghani, there is speculation that a Blackberry or even Bubba Kush phenotype is included in the lineage. B.B. Kush is regarded as a modest yielder, but its quick flowering time and top-shelf results are more than enough to validate the effort of its growers.

Showcasing dense, chunky nugs with a rich purple hue throughout, this strain demands attention, even amongst its top-shelf peers. Visible trichomes thickly layer the exterior of the well-proportioned nugs: uniform 'football-shaped' structure, firm to the touch, and minimal stem running through its body. Its fragrance is unique, and can best be described as mostly sweet, but mildly earthy--think Grand Daddy Purple meets classic Kush.

Several online resources identify linalool and pinene as the most prominent terpenes found in the strain. Linalool is commonly associated with “giving lavender its distinct scent and flavor,” but can also be highly concentrated in cannabis, particularly ‘purple’ strains. It’s lauded as an effective pain-reliever, antidepressant, and sedative, explaining lavender’s “use as a calmative for thousands of years.” Pinene generally smells of sweet pine, and is known to help battle inflammation and promote alertness. Through patient feedback and hands-on experience, we’ve found the sedating effects of linalool to outweigh the awareness-promoting qualities of of pinene in the case of B.B. Kush!

We were fortunate to sample the Blackberry Kush Elemental Premium Vaporizer, currently available at Elemental for $39/eighth. The terpene profile and effects of the strain were translated to oil flawlessly -- a quick smell evaluation uncovered the refined sweet, berry-like aroma we've come to expect from the strain, and the performance test revealed the same heavy, stoney effects we've come to know from these top-shelf genetics!

Testing at just a hair under 80% THC, the strain offered a palpable psychoactive experience, yet never overwhelming, allowing the strain’s therapeutic qualities to shine. We were initially met with a brief period of intense euphoria--a bit surprising considering the ‘heavy indica’ descriptions we found littered across the interwebs. Though, sure enough, the feeling dissipated as quickly as it appeared, leaving us with a deep-seated relaxation that helped to melt away the day’s aches, pains, and stresses. The effects sustained for the better part of the following two hours, leaving us in a state of calmed bliss, ready to ease into sleep for the night. We highly recommend this strain for patients battling insomnia!

Overall, Blackberry Kush provided a pleasant experience from beginning to end--ideal for patients who enjoy sweet-tasting, sleep-inducing meds! Ask your consultant about B.B. Kush on your next visit!