Blog / Science / Cannabis in the NFL

Cannabis in the NFL 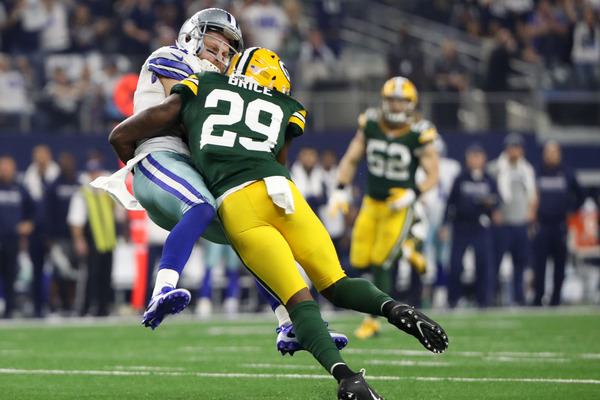 The National Football League and pain have a long, storied history with each other.

Let’s face it: 250-pound men simply aren't meant to repeatedly run into each other at full speed; chronic pain is an accepted consequence of long-term participation in this game. The remedies that players have been provided with to manage this pain has been the subject of much speculation over the years. Hall-of-Fame quarterback Brett Favre had a public bout with Vicodin addiction in the mid-90s, and former receiver Calvin Johnson once stated that NFL team doctors hand out opioids “like candy.”

Recently, the question of whether the NFL should consider allowing players to medicate with cannabis has been propelled back into national discussion.

But the League and Commissioner Roger Goodell have stubbornly refused to budge on the issue, keeping cannabis placed firmly on their banned substances list. Essentially, Goodell repeatedly defers to league doctors on the issue, who, due to DEA research restrictions, “don’t have enough evidence” to confirm or deny the medicinal benefits. This revolving door is likely to spin for a while, with Goodell recently saying, “I don’t foresee a change in [cannabis policy] in the short term.”

There are a myriad of possible benefits that Goodell is simply ignoring by choosing to go this route. Chronic Traumatic Encephalopathy (CTE) has plagued the league for years, affecting a disturbing number of retired players. The NFL recently settled a lawsuit with over 20,000 of these players, agreeing to pay out approximately $1 billion dollars in compensation.

To this point, the furthest the NFL has been willing to go, was back in July 2017, when Goodell and company wrote to the NFL Players Association, offering to, "work in tandem to study the potential use of marijuana as a pain management tool for players." It's unclear if or how much these plans have progressed since the announcement, but in the meantime, NFL players will continue to pay the price.

Consider that, despite limited research, several studies have already suggested that CBD may act as a neuroprotectant to help protect against brain injuries--brain injuries such as CTE.

It appears to be in the best interest of both parties to reassess the place of cannabis in the football world.

“We know that CBD is neuroprotective,” Dr. Bill Kinney said in an interview with Sports Illustrated. “We have seen effects in both protecting against cell death and increasing cell viability… We think CBD could protect the neurons from future injury and also help them repair.”

While cannabis certainly shows promise for brain injuries, it also can help manage chronic pain and improve overall quality of life. Research has identified a possible link between concussions and depression; 40% of former NFL players exhibit symptoms of depression--three times more than the general population. In conjunction with general chronic pain from years of wear and tear on the body, many retired players experience serious issues adjusting to a post-football life.

Leonard Marshall, a former New York Giants lineman, is among them. Marshall is riddled with daily pain and has shown signs of CTE (depression, mood swings, etc.); no doubt from the thousands of collisions he endured throughout his 12-year pro football career. These symptoms severely affected aspects of his personal life before he began medicating with CBD earlier in the year.

Despite several testimonials such as Marshall’s, the NFL continues to ignore the pleas of its former and current employees.

Retired players have estimated that up to 70 percent of the league partakes in cannabis use; a clear sign that many are finding benefit in the plant’s therapeutic properties. Yet the league continues to insist on shoving destructive and addictive opioids down the throats of its players.

ESPN’s Outside the Lines conducted a study in 2010 indicating retired NFL players abuse opioids at a rate more than four times that of the general population. It touches on the daily challenges for former tight end Dan Johnson, who claims to have at one point been taking “about one thousand Vicodins a month.”

Though opioids are a major concern, the worries certainly don't end there.

Another drug, Toradol, has crept its way into the sport over the past decade, and is also proving much more dangerous than cannabis. The drug was initially intended for post-surgery pain management, and clearly instructs users that “the total combined duration of use should not exceed 5 days.” At least two different former players have been quoted saying they were injected weekly with the drug for six and nine years, respectively. The NFL has faced various lawsuits claiming that Toradol is responsible for a variety of long-term issues, including anxiety, depression, and kidney degradation.

Yet, the drugs continue to thrive in NFL locker rooms; which is interesting considering Goodell has cited “addiction and other negative impacts” as reasons why the league is hesitant to allow cannabis use.


Stigmas are a strange phenomena that can prevent otherwise reasonable people from accepting obvious truths concerning a person, group, or idea. Unfortunately, cannabis’ negative stigma within NFL circles is preventing its progression as a possible medicine for ailing players. In the future, the idea that opioids were once considered a safe alternative to high-CBD remedies will be laughable--for now the situation is anything but funny for current and former NFL players.