Diabetes mellitus, or simply diabetes, is a chronic, lifelong condition that affects a person’s ability to healthily manage and produce insulin; in other words, it severely hinders the body’s ability to use the energy found in food. If left unmanaged, the ailment can cause blindness, heart disease, kidney failure, nerve damage, stroke, and ultimately death.

There are 2 primary types of diabetes: the more serious type 1 diabetes (juvenile diabetes which is also an autoimmune disease) where the body is incapable of producing insulin on it’s own, and the less severe type 2 diabetes (adult-onset diabetes) where the body produces inadequate amounts of insulin. The former requires consistent supplemental insulin, often in the form of syringes and insulin pens, while the latter can be better controlled with good diet and nutrition, but may still require medication. Although diabetes can be healthily managed, there is currently no known cure.

Those suffering from Diabetes will be pleased to hear that recent scientific medical studies show that cannabis can be useful in the treatment of the disease. One exciting study published in the American Journal of Medicine (Penner, E, et al., May 16, 2013), concludes, “We found that marijuana use was associated with lower levels of fasting insulin and HOMA-IR, and smaller waist circumference.”

Very recent studies have shown that Cannabidiol (CBD) was useful for lowering incidents of diabetes in animal models; that CBD has protective properties against both the vision impairing symptoms of diabetes and against cardiomyopathy (complications of the heart) is also important to note. Additionally, Tetrahydrocannabinol (THC) has been shown to reduce artificially elevated glucose levels in mouse models - human trials are definitely in need.

Other studies also show that Tetrahydrocannabivarin (THCV) may be useful for controlling unhealthy weight in the obese individual, which may help in controlling the symptoms of diabetes. Two major characteristics of cannabis may also benefit those suffering from diabetes: 1) cannabis has vasodilator properties and that it helps to improve blood flow, and 2) cannabis may help to significantly reduce blood pressure over time.

Last but not least, the following chart denotes which cannabinoids and terpenoids work synergistically with each other for possible therapeutic benefit: 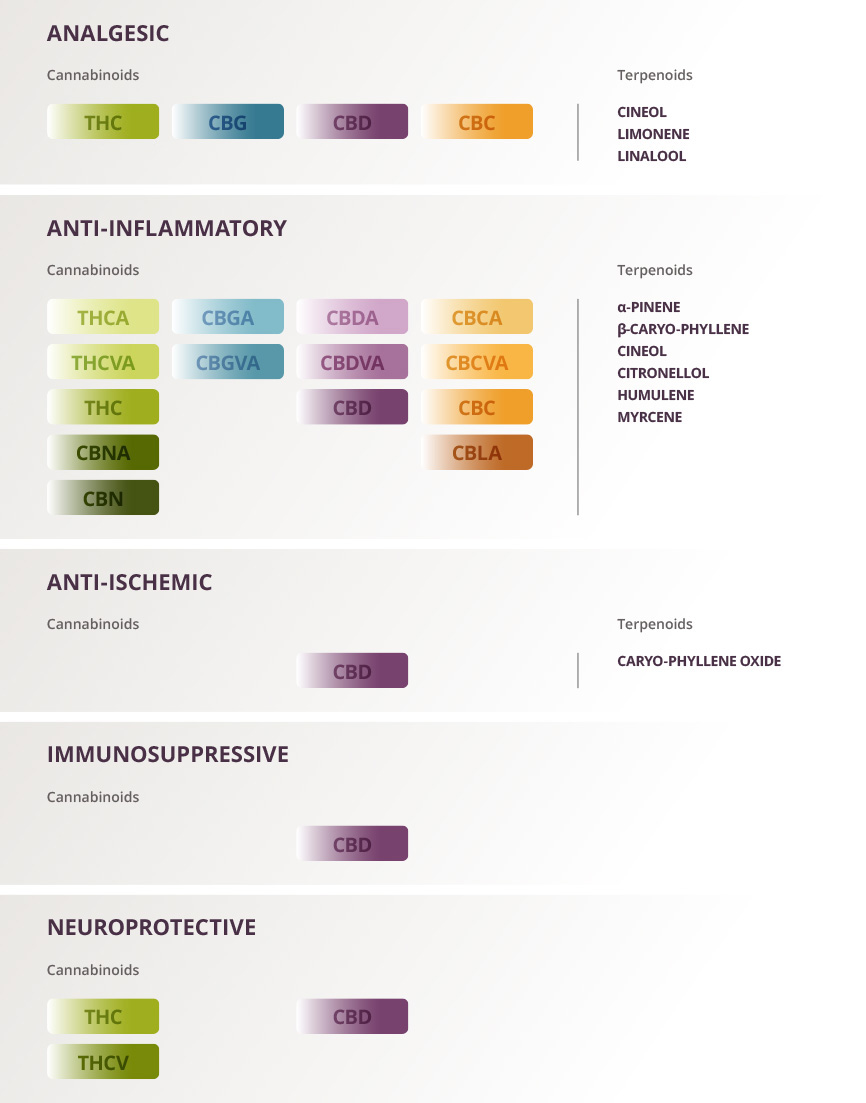 Cannabinoids and the immune system: potential for the treatment of inflammatory diseases?Croxford, JL, et al.
Journal of Neuroimmunology, 2005 Sep, 166(1-2): 3-18.